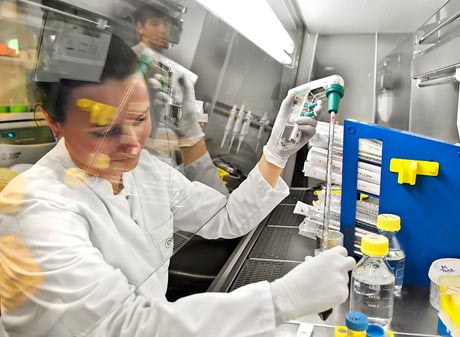 OA is the most prevalent disease of the human joint and has a massive socioeconomic impact. There is an extensive need for medical innovations which stop and/or reverse the cartilage degeneration. Focal cartilage defects can be regenerated with autologous chondrocyte transplantation – a technology developed by the laboratory for tissue engineering. For disseminated OA however, the only “curative” treatment available is the surgical implantation of an endoprosthesis. Intraarticular injections of corticosteroids are known for lowering inflammation for a limited amount of time – but do not slow down disease progression. The Laboratory for Tissue Engineering is currently developing a regenerative therapy based on mesenchymal stromal cells (MSCs), which can be applied in all stages of OA. The therapy aims to recruit MSCs into the joint by intraarticular injections of the chemokine CCL25 - which then create a regenerative micro-environment for the damaged cartilage. In an OA-animal model, 20% decreased cartilage degeneration was observed after 4 weeks of subsequent CCL25 injections.

Unfortunately, very few is known about adverse effects of chemokine signaling. An injection bares completely unknown risks and as research in cytostatic drugs showed, the effects of drugs on cells in monolayer culture are highly incongruent to effects in-vivo. When talking about effects, the target cell always has to be regarded in the context of the tissue it is embedded in. Extracellular matrix and adjacent cells heavily influence cell behavior – from receptor expression to migration pattern. Hence, models are required which represent the native tissue situation as well as possible. This may lower the time and resources spent before a go/no-go decision is reached - as well as reducing the number of required experiments on animals. Thus, this project aims to build a model of the human joint from native human tissue to expose the target cells with the therapeutic agent – effectively screening for any form of undesired tissue behavior. The model shall consist of tissue slices from living human joint tissue which is resected during endoprosthesis implantation. These will be cultivated in hanging inserts for three consecutive weeks und after establishment exposed to chemokines to assess any histologic disintegrity and inflammatory reactions. The project is designated to make use of Charité exceptionally good relation between clinic and research and establish live tissue culture long-term for other subjects of research in this field.

So far, we determined a high viability of the tissue slice over a 3-week time span using biochemichal and optical approaches Histological analysis showed highly conserved tissue integrity and cartilage-typical cell behavior. Next milestones will be final characterization of the model by testing its reactivity towards externally applied stimuli - assessing tissue slices feasibility as an advanced in vitro model for screening adverse effects of innovative therapeutics. Finally, we aim to stimulate the osteochondral tissue with CCL25 creating a more informed a go/no-go decision to go forward with the development of the therapy.

The adrenal cortex produces steroid hormones (aldosterone from the outermost zona glomerulosa, cortisol from the zona fasciculata and sex steroids from the zona reticularis). Disorders affecting the adrenal cortex represent a major health burden. They include primary aldosteronism (overproduction of aldosterone, a major cause of secondary hypertension), Cushing syndrome (overproduction of cortisol) and adrenal insufficiency (Addison’s disease). In development, the adrenal cortex is formed from the intermediate mesoderm. In adults, according to the centripetal migration model, glomerulosa cells undergo lineage conversion into zona fasciculata and reticularis cells and eventually apoptosis at the corticomedullary junction.

In this project, we aim to address two challenges in adrenocortical research and therapy: the lack of adequate disease models and the inadequate replacement of adrenocortical hormones in states of deficiency. Human adrenocortical cancer cell lines, for example H295R, have been used commonly as a model system for aldosterone production. However, these cells produce steroids that originate from multiple zones of the adrenal gland and lack the cellular organization that is characteristic of the adrenal cortex in vivo. Moreover, animal models, especially rodents, are not ideal models for studying adrenal pathology due to differences in the development, structure and physiology between humans and rodents. From a clinical perspective, the conventional therapy for patients with adrenal insufficiency is hormone replacement, which is far from optimal because it does not mimic the circadian (morning peak) and stressinduced pattern of cortisol secretion; this could be addressed by the transplantation of cells or organoids that produce hormones in a physiological fashion.

Since the first generation of human iPSCs, a variety of cell lineages and several complex mini-organs (intestinal, brain and kidney organoids) have been generated. However, adrenal organoids so far have not been reported. We here propose to develop human induced pluripotent stem cell (hiPSC)-derived functional adrenal lineages and adrenocortical organoids, which can be used to model adrenal disorders and potentially for future cell- and organoid-based therapy. In prior studies, the main activator used to convert fate from adult and pluripotent stem cells to steroidogenic cells was NR5A1 (encoding steroidogenic factor 1 or SF-1), which not only plays a role in adrenal, but also in gonadal development. Although hiPSCs have been differentiated into steroid-producing cells (Sonoyama et al. Endocrinology 2012), these cells lacked expression of CYP11B2, encoding aldosterone synthase. As part of the Einstein Kickbox, we optimized differentiation of hiPSCs towards intermediate mesoderm. We will now investigate expression profiles on the single-cell level in adrenal development to identify candidate differentiation conditions from intermediate mesoderm towards adrenocortical cells beyond the established SF-1. We will optimize differentiation conditions in order to obtain cells that represent the three zones of the adrenal cortex, followed by adrenal organoid generation using defined niche factors and an appropriate extracellular matrix, and subsequently examined in vitro as a functional mini-organ. As a proof-of-principle experiment, we propose to repair a disease-causing CLCN2 mutation in iPSCs generated from individuals with familial hyperaldosteronism (Scholl et al. Nat Genect 2018). Adrenal cells and / or organoids will be generated in parallel from iPSCs in which the mutation has been repaired as well as their isogenic controls. Subsequently, the generated adrenal organoids will serve as adequate tissue models to investigate the mechanism of primary aldosteronism. Similar models of other adrenocortical diseases can be used in the future to screen for drugs as personalized interventions, a completely novel approach. For rare genetic diseases of the adrenal cortex, future autotransplantation strategies would be highly promising.

Generation of induced pluripotent stem cells (iPSCs) from somatic cells offers a great opportunity to study basic mechanisms in development, adult tissue homeostasis and to model human disease in vitro. Genome editing in iPSCs is a powerful investigative technique, which enables to introduce precise changes in the genome.

As information about the nanoscale localization and function of BMP receptors is still lacking due to absence of functional specific antibodies, we aim to apply CRISPR/Cas9 genome editing to address a major unsolved question in the research field of growth factor signaling.

To address these questions, we aim to generate genetically engineered human iPSC lines, containing an endogenously GFP tagged BMP type I receptor ALK2 to enable direct receptor visualization.
Mutations in the ALK2 gene cause the rare disorder Fibrodysplasia ossificans progressive (FOP), which leads to severe extra skeletal, heterotopic ossification (HO). Shedding light of the subcellular localization of ALK2 will accelerate the understanding of BMP receptor biology and will be beneficial for the development of more targeted treatment strategies for FOP.

Thus, we will use iPSCs from FOP patients and healthy control donors in order to generate WT and FOP ALK2-GFP iPSC lines to solve the question about the subcellular function of the mutant and WT ALK2 receptor. A genetically engineered FOP iPSC line enables the differentiation to disease relevant cell types, such as vascular endothelial cells (ECs), which contribute to HO via endothelial to mesenchymal transition (EndMT). Elucidating a possible disease-related mislocalization and/or lateral mobility of ALK2 in ECs by super resolution microscopy may be a novel approach for therapeutic intervention.

B cells are challenging to study; complex to culture and thus it is virtually impossible to follow their maturation path in vitro. This is mainly due to difficulties accessing their site of origin: the bone marrow (BM). Information on B cell development is mainly available from mouse and rat studies. However, in recent years it became clear that murine models are insufficient to mimic B cell biology in humans. Differences such as the role of BCR signaling; along with ethical concerns make animal studies in B cell biology questionable. Thus, the aim of the projected work is the development of a reliable human BM system which could hold the potential to study B cells close to an in vivo - situation. In a previous project we developed a 3D bone/BM organ-on-a-chip system. In the course of this project, by chance, we found that the system maintained a CD19 + (B-lymphocyte antigen) cell population over a time course of 28 days. We will further investigate the subpopulations in depth using flow cytometry and mass cytometry (CyTOF) and fine-tune the microenvironment to ultimately establish a selfrenewing, stable and heterogeneous B cell population. If successful, the benefits in terms of the models’ applicability in basic research are pronounced. The model could give completely new insights into B cell development in humans. In addition, the possibilities of translating it into therapeutic approaches (culturing B cells for clinical use) and for commercialization are immense.

Bone fractures are one of the most frequent orthopedic problems requiring medical treatment. Facing an aging population, specifically in the western world, a better understanding of how bone regeneration processes are altered with age is essential to develop novel treatment strategies satisfying the clinical need. We have recently developed a toolbox to simulate and study extracellular matrix (ECM) formation in vitro by cultivating primary human fibroblasts inside 3D macroporous collagen scaffolds. We propose that under compromised conditions such as aging, these early tissue formation processes are altered (e.g. by ECM secretion pattern, ROS level, cellular tension) with further consequences for stem- and progenitor cell migration, proliferation and differentiation.

Our project is based on observations from plastic surgery: autologous fat grafts lead to a significant reduction of scar tissue. We will attempt to identify the fat components responsible for this phenomenon, as well as the molecular pathways they work within. Therefore, we will study the interactions between myofibroblasts, a cell type already known to play a crucial role in wound healing, adipocytes and the adipocyte secretome. Since wound healing processes include changes to the extracellular matrix, we will analyze matrix remodeling alongside changes to the intracellular signaling of myofibroblasts cultured in 2D and 3D. Ideally, we would like to incorporate a pathological phenotype into our studies. To this end, a research stay in the group of Susan Gibbs, Vrije University Amsterdam, has been organized during the Kickbox period, during which we will work with fibroblasts isolated from hypertrophic scars.